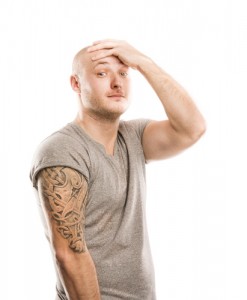 According to the latest statistics, at least 20% of all people who get tattoos regret the choice they made, and for a variety of reasons. Some regret it when they get rejected for a job they really wanted, or if they got denied entry into the military. Many branches of the military do not allow tattoos to be visible.

Other big regrets occur when people become parents or grandparents, especially when their tattoo that once seemed “cool” now lead to inquiries from children that they would otherwise prefer to bury under the rug. And then there are a few tattoo wearers who mistakenly etch the names of ex-boyfriends or ex-girlfriends on their skin, thinking the relationship will last forever.

For all of these regrets and more, the need for tattoo removal has become a popular alternative to living with the shame of a tattoo. In fact, the rise of tattoo removal services in the Southwest and other parts of the country has increased by 43% in the last five years. But now the rates might increase even more, due to the introduction of new technology available that will make tattoo removal an easy thing.

What is the easiest method of tattoo removal?

Residents of the Southwest can get PicoSure™ tattoo removal, which is a brand new, laser technology that makes it very easy and convenient to remove a tattoo. Whether small or large, the PicoSure™ advanced laser gives patients a flawless look that brings your skin back to its “pre-tattooed” condition, using rapid, pulsating energy waves that get down through the layers of skin. It doesn’t require any touching of the skin and is virtually painless, especially compared to the pain of getting a tattoo.

PicoSure™ is the latest technology offering tattoo removal for all colors in the least amount of treatments. Even if you have attempted tattoo removal with other lasers with little or no results, PicoSure™ tattoo removal can offer better clearance.

At Southwest Plastic Surgery in El Paso, we are pleased to bring this revolutionary new tattoo removal service to our MedSpa side of cosmetic enhancements. Most patients will require multiple sessions to get the full effect of PicoSure™ laser removal, but the secret is out and now more people than ever are coming to El Paso to get old, unsightly or undesirable tattoos plucked off their bodies.

If you are interested in removing a tattoo in Texas or New Mexico, schedule a consultation or PicoSure™ consultation with Southwest Plastic Surgery today.